GET THE FULL DRUPAL 8 REPORT

Get the same information organizations like Harvard, Santander, GE, and John Hancock are using to capitalize on their upgrades.

Thanks for downloading - you'll get a link to the full PDF in your inbox shortly. In the meantime, you can see how we've helped companies like yours.
Oops! Something went wrong while submitting the form. Please ensure all required fields are filled out correctly.

Is your team ready for Drupal 8?

100,000+ savvy companies have upgraded to Drupal 8 - and improved their digital experience with it.

Our Drupal specialists produced this report to help our clients make an informed decision. Now we're offering it to you, for free.
READ MOREDOWNLOAD GUIDE

— Drupal 7 isn't getting retired until November 2021. So why are Drupal developers talking about upgrading to Drupal 8 (or 9)? And should you?

This report answers those questions (and more) for VPs, Directors, and Managers wondering about upgrading to Drupal 8. Even more importantly, it provides a strategic framework for approaching the upgrade that can flip it from a cost center to a driver of strategic growth. 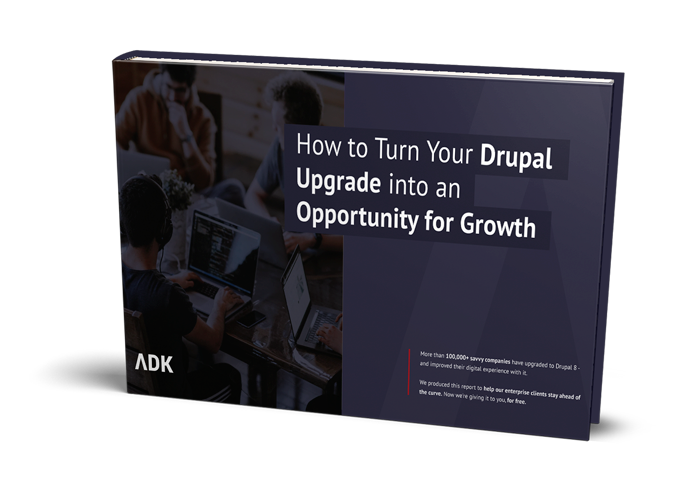 THE 3 MOST IMPORTANT THINGS TO KNOW ARE

—YOU WILL NEED TO UPGRADE YOUR WEBSITE IF YOU WANT TO CONTINUE USING IT.

When Drupal 7 gets "end of lifed" that means it will stop receiving security updates and patches. This exponentially increases the risk of hackers exploiting your website, puts a wall in front of advancements to your technology, and makes development costs creep (or shoot) up.

—THIS IS AN OVERHAUL, NOT AN UPDATE.

The transition from Drupal 7 to Drupal 8 is a nearly complete overhaul of the technology that powers your website. That means your site’s speed, security, and UX can greatly improve. But this is not an update you can install overnight like your phone’s operating system - it is a significant lift closer to building a new website

—THE COMPLEXITY MAKES IT A GOOD TIME TO IMPROVE YOUR WEBSITE.

Drupal 8 is essentially a site rebuild. Experienced developers can tackle backlogs of features or structural changes during the update. Batching big lifts like this is often the most efficient way to accomplish them, while changes before upgrading may mean repeating work.

The clients of ADK Group faced challenges similar to what you're grappling with right now. The answers below helped them turn their upgrade into a growth opportunity. We hope they can help you, too.

As one of New England's leading Drupal firms, ADK Group has been building large Drupal 8 applications since Drupal 8 was released in 2015. Over dozens of large Drupal implementations, our Drupal experts have learned a thing or two. The same experts who wrote this guide led high-impact Drupal projects like the ones below.
How can we help you achieve your technology goals?

In November 2021, Drupal 7 will no longer receive active support from the Drupal community, resulting in no further security updates. This also means that integrating future modules and applications, and basic site maintenance initiatives will be much more difficult as time passes. To ensure your website remains secure, online, and healthy, you need to upgrade it to a more modern application.

— Drupal 7 vs Drupal 8—What's the difference?

Drupal remains a powerhouse in the Open Source CMS world (and can be better than the popular WordPress for certain applications). The structural limits of Drupal 7 were identified early, and powerful additions were made with the introduction of the more modern, scalable, and secure Drupal 8.

KEY BENEFITS OF DRUPAL 8 INCLUDE:

GET THE FULL REPORT NOW.
READ IT ANYTIME.

— Should we wait and upgrade from Drupal 7 to Drupal 9?

No, if only it were that easy. The difference between previous versions and Drupal 8 is substantial, and that's where the benefits lie. Drupal 9 is essentially cleaning up vestigial parts of Drupal 8: it removes some legacy and deprecated code, without adding any new features.

Upgrading to Drupal 8 now lets you get all the benefits without waiting. And once you're on Drupal 8, getting onto Drupal 9 will be negligible.

— Will upgrading from Drupal 8 to Drupal 9 be as much work?

Also, no. Drupal’s founder and project lead, who is the co-founder of Acquia, Dries Buytaert, has provided his insight and expertise around this exact topic. According to Buytaert, “the big deal about Drupal 9 is…that it should not be a big deal. The best way to be ready for Drupal 9 is to keep up with Drupal 8 updates.” He says “the upgrade to Drupal 9 will be easy. Because we are building Drupal 9 in Drupal 8, the technology in Drupal 9 will have been battle-tested in Drupal 8.”

Additionally, Drupal.org confirmed this by saying, “it’s made to be an upgrade from Drupal 8. All components from Drupal 8 will be working on day one of Drupal 9.”

Based on these reputable sources, we are confident that the upgrade effort for transitioning from Drupal 8 to Drupal 9 will be minimal. That upgrade will likely take days—or even hours—depending on the complexity of your site. Upgrading from Drupal 7 is a much more involved process.

— How much work is it to upgrade from
Drupal 7?

It depends on the complexity of your website, but it can be quite involved and take multiple months. There are substantial technical differences between Drupal 7 and Drupal 8+. These differences are significant enough that Drupal 8+ is often considered an entirely different type of technology. As such, Drupal 7 cannot be "upgraded" to Drupal 8. A Drupal 8 application needs to be built from the ground up, with careful migrations conducted with individual parts of your platform.

These questions begin your journey, but an audit and planning phase that highlights unique opportunities and issues is the next step. Get a no-obligration code audit to help kick off your roadmap with confidence.

— What sort of projects should I consider during the upgrade to Drupal 8?

Drupal 8 unlocks advanced functionality that lets your website perform better than before. How can you best take advantage of this?

Here are some areas you should think about:

IMPROVE YOUR UX AND DESIGN

If you've been auditing your user experiences or working on improving conversion rates you likely have a backlog of improvements to make. This update could be a great time for the implementation of design refinements and new features based on the results of Conversion Rate Optimization or User Experience Audit.

Drupal 8 has extensive support for multilingual capabilities. Capabilities allow for native language support for the administrative interface in addition to the public site, and how this information is presented and managed to users. This—along with thoughtful SEO—can help your company establish a digital foothold abroad.

Many people complain about the administrative side of Drupal 7. And oftentimes resources aren't devoted to that. But upgrading to Drupal 8 is a great time to take advantage of the improved UX and flexibility by making customizations. These could allow for faster data searches, improved permission controls, and easier content management.

Drupal is at its best when it's handling large sets of complex data. The newer Drupal 8 Migrate API allows for finer-grained controls of the frequency, resiliency, and notifications for data imports.

Being ADA compliant in 2020 is table stakes. From the administrative interface to the semantic HTML5 output by the Twig template engine, Drupal 8 helps your website reach a larger audience than ever.

GET ANY DRUPAL QUESTION ANSWERED.

If you want to make sure you continue to get the most from Drupal—and potentially more—you need a strategy to update with minimal disruption. We’d love to help you make that strategy and ensure that it’s customized to the unique opportunities your website has.

SO, LET US KNOW - WHAT'S YOUR BIGGEST CHALLENGE OR OPPORTUNITY FOR YOUR DRUPAL SITE?